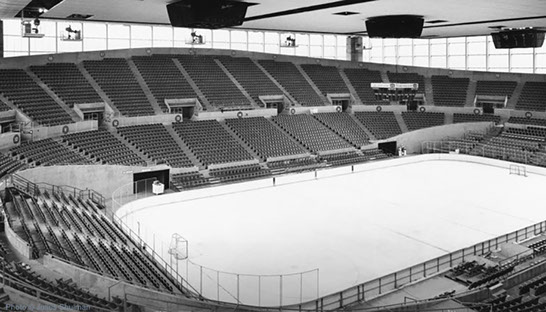 Veterans Memorial Coliseum remains a busy multi-purpose arena today (even with deferred maintenance), and that viability is the key to its future. But this also has long been a building that brings people together in innumerable ways. It’s a gathering place for any number of sporting and Rose Festival events, concerts, college graduations and political rallies. It’s also a sobering and inspiring veterans’ memorial, as well as one of the great works of 20th century modern architecture: a one-of-a-kind landmark, as well as a storehouse of Oregon’s cultural history from Beatles to Blazers to Barack – and more than a half century of Grand Floral Parades.

And yet this building’s potential has remained frustratingly hidden away from even Oregonians who have spent their lives going to the Coliseum. The open-curtain configuration that makes it utterly unique and breathtaking has been largely closed off. We’re inspired not just to save and restore Veterans Memorial Coliseum, but to re-open its potential and possibility. Great, inspiring designs have both a cultural and economic value, and that’s something we want to sustain and build on.