The Beatles arriving in Portland

The Beatles and others backstage
Memorial Coliseum, Portland, August 22, 1965 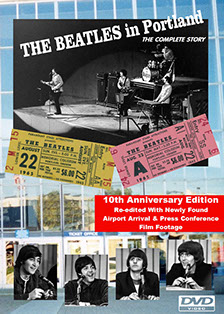 Everybody's Trying To Be My Baby

Additionally, the second show opened with a truncated version of

"The screaming began and it never ended"

"When they came out, the place exploded"

"The only experience I had of mass hysteria"

The Beatles, Paul, John, George and Ringo, toured the United States several times in their short career performing in many cities. On August 22, 1965, the Beatles came to Portland, Oregon with one of their charter plane’s four engines belching flames and black smoke as the plane descended into Portland (oil leaking onto a hot engine). John Lennon was frightened enough to quickly write a few messages which he enclosed in a film canister for safety. Fortunately for all, the plane landed without further incident, and a relieved Lennon was heard to shout: "Beatles, women and children first!"

Portland was not a main stop on a lot of tours in those days. It was usually just a city that groups passed through on their way between Seattle and San Francisco or Los Angeles. But for one day in 1965, at the highest point in their popularity, the Beatles played two performances at the Memorial Coliseum with its trademark glass shell to nearly 20,000 screaming fans.

Afterwards the Beatles held a press conference between concerts. John Lennon said he was glad that fans had quit throwing jelly beans at the Beatles while they were performing on stage as it hurts.

The Beatles performed two shows at Portland's Memorial Coliseum, before a total of 20,000 people. Tickets for each of the shows were priced at $4, $5 and $6. There were also a number of pink tickets for the Coliseum's upper level which were free.

The concerts took place at 3.30pm and 8pm. The support acts on the bill were Brenda Holloway and the King Curtis Band, Cannibal & The Headhunters, and Sounds Incorporated.

Among The Beatles' guests backstage were Carl Wilson and Mike Love of The Beach Boys.

The fifth clause in the The Beatles' contract received particular attention, and praise for the group. It said: "Artists will not be required to perform before a segregated audience."

Then the Beatles went to the airport, climbed into a new plane, brought in to replace the original charter aircraft, and soared away, bound for Los Angeles. The Beatles arrived in a cloud of black smoke and left in a blaze of glory.

from the Beatles Bible: http://www.beatlesbible.com/1965/08/22/live-memorial-coliseum-portland-oregon/

* quotes from "Beatles In Portland - The Complete Story", by Chuck Stenberg. Thank you Chuck Stenberg for your help in putting this page together.