The Friends of Memorial Coliseum was formed in April 2009, after the City agreed to partner with Merritt Paulson, owner of the Portland Timbers soccer team and then Portland Beavers minor-league baseball team, to build a new Beavers baseball stadium on the Coliseum site, after demolishing Veterans Memorial Coliseum.

After the public presentation of the demolition plan, an intense grassroots preservation campaign, in partnership with veterans and cultural organizations, was begun to stop the demolition. The Coliseum was soon added to the National Register of Historic Places and the mayor agreed to reverse course, creating a Stakeholder Advisory Committee to receive and evaluate new ideas for the building, which was officially renamed Veterans Memorial Coliseum to heighten its status as a veterans memorial (the entire building is the memorial, not just the memorial walls and courtyards outside). Although there was no shortage of Stakeholder Advisory Committee proposals—including a water park, a peace garden and a fitness center—the Coliseum’s existing multi-purpose configuration was determined to have the greatest viability. Despite the Portland Trail Blazers having left for the adjacent Rose Garden arena (now the Moda Center) in 1996, Veterans Memorial Coliseum has continued to be busy, with well over 100 events per year.

In 2012, Portland City Council was set to vote on a $31 million restoration of Memorial Coliseum, which included some $10 million in contributions from the Portland Winter Hawks hockey team, which has long called the building home. Ultimately, there was no Council vote before a new Mayor took office on January 1, 2013.

The new Mayor has proposed a more extensive renovation than the $31 million originally forecast, perhaps including new amenities such as an indoor track and expanded concessions. To raise the funds, additional private partners may be needed, and/or the city may also choose to fund a Coliseum restoration leveraging funds from redevelopment of adjacent parcels of land.

Meanwhile, the Friends of Memorial Coliseum seek to protect Veterans Memorial Coliseum from modifications that degrade the design of this historically registered, masterpiece building. Luckily, Portlanders know that great cities don’t destroy their greatest buildings. Portland is fortunate to have a modern masterpiece of this caliber. 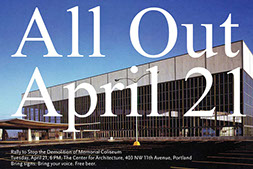