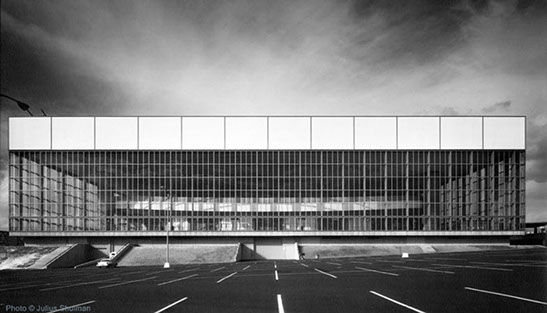 Completed in 1960, Veterans Memorial Coliseum was added to the National Register of Historic Places in 2009. The National Register, operated by the National Park Service, is “the official list of the Nation's historic places worthy of preservation… part of a national program to coordinate and support public and private efforts to identify, evaluate, and protect America's historic and archeological resources.”

The Coliseum is equivalent to nearly four Portland city blocks in size (360 feet square), yet stands on just four columns. The concrete seating bowl, offering unprecedented 360-degree views of the downtown Portland skyline and the Willamette River, also sits completely untouched by the surrounding glass curtain wall. Designing public architecture this way “provides grandeur and dignity to a commemorative building,” as well as “a public face for Portland’s shared aspirations in recreation and culture…The building’s advanced engineering allows it to provide a spatial experience unlike that in any other recreational venue.”

The building’s National Register listing includes not only the exterior walls, but also the seating bowl (arena), the concourse, the memorial courtyards, the entrance canopy, and the setting of the building. What’s more, the interior is an irreplaceable part of the exterior, in that viewing the façade from outside means seeing the curving arena bowl through the glass. While the City of Portland can legally demolish the building despite its National Register listing, federal historic tax credits provide a multi-million-dollar incentive to restore the building, and a series of reviews by the city’s Historic Landmarks Commission and other agencies would be a lengthy process.

Please click one of the links below to learn more about the building’s protections.