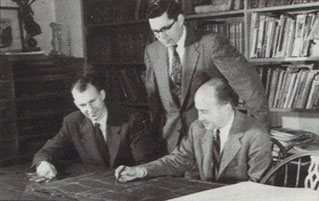 Skidmore Owings and Merrill was the architect for Memorial Coliseum and Moffatt, Nichol & Taylor was the structural engineer. The building was designed by a group of designers, led at first by Myron Goldsmith, working out of the firm's San Francisco office, and later by a team that included Gordon Bunshaft, who was the design partner in SOM's New York office. The documents for the Coliseum were prepared in SOM's Portland, Oregon office, led by David Pugh. The SOM Portland office was established in 1952 after SOM acquired Pietro Belluschi's office. Bill Rouzie was one of the lead designers for the Coliseum, and Ed Gustafson was on the Moffatt, Nichol & Taylor structural engineering team.

"The Coliseum was designed in 1957-59 in the Portland office of Skidmore, Owings, and Merrill. lnitially, the lead designer of the Coliseum was Myron Goldsmith, who in the late 1950s worked primarily out of SOM's San Francisco office. Although SOM's website credits Goldsmith with the design, Goldsmith himself attributes the final design to others. ln a 1986 interview, Goldsmith explains that he had proposed a circular, concrete design which did not sit well with Portlanders. His design, Goldsmith said, ". . . was rejected in favor of the scheme that they did" (lt is not clear who "they" might have been, however). Goldsmith adds that later, he ". . . tried again and this time succeeded." Goldsmith was referring to the Oakland Alameda County Coliseum (1964-68). The circular coliseum building constructed in Oakland only five years later is essentially the design Goldsmith proposed initially for Portland, but it still shows some striking similarities to the final incarnation of the Portland Memorial Coliseum. The seating bowl is freestanding within the walls, which are entirely glazed. The form of the building is a geometrically "pure" shape in plan (a circle, rather than a square as in Portland). These similarities indicate that Goldsmith's initial design for Portland's Coliseum must have influenced the final building design. Another reason to believe that Goldsmith had some imprint on the final design of Portland's Memorial Coliseum is that Goldsmith had worked extensively with Mies van der Rohe prior to joining SOM. Portland's Coliseum shows many attributes in common with much of Mies's work, including the flat-roof structural technology and all-glass walls. Yet Mies developed his ideas with others, perhaps most significantly with Goldsmith. Myron Goldsmith was trained both as an architect and an engineer, and the "two-way gridded roof structure of the 50 x 50 House, which Goldsmith developed, was at the root of all Mies's two-way gr¡dded roof structures from the Convention Hall to the New National gallery for Berlin.

After Myron Goldsmith's concrete design was rejected and Goldsmith returned to SOM's San Francisco office, the Portland office produced two variations of a new, rectilinear building. A number of architects and engineers were involved in this new design direction. Among the architects working on the Coliseum in the Portland SOM office was A. William Rouzie, who had collaborated with Walter Netsch on SOM's U.S. Air Force Academy in Colorado Springs, Colorado. Mr. Rouzie recalled that Portland's powerful timber industry had actually produced their own arena design - a building entirely of wood, with a domed structure. According to Mr. Rouzie, when SOM designers caught wind of this design, they thought it would be too enclosed, and also had concerns with flammability. Senior design partner Gordon Bunshaft came to Portland from SOM's New York office and Walter Netsch came from Chicago to take part in design strategy meetings with Bill Rouzie and with John Merrill Jr., SOM partner and Portland's initial office manager. The idea of creating a transparent building was agreed on, given the spectacular views afforded by the site. David Pugh Sr. took over management of the Portland office and was involved during early design of the project. Mr. Pugh said of the building, "We wanted it to be open and friendly, and, with those views, to be able to see the city. There was nothing l¡ke it that had ever been done."

SOM architects worked with Portland-based structural engineers Moffatt, Nichol & Taylor, who had designed Reser Coliseum (1950) on the campus of Oregon State University and were just finishing a design for a new bridge over the Willamette River in Portland, the Morrison Bridge (1958). Ed Gustafson was on the structural design team for the Coliseum. ln the Portland SOM office, other architects such as John Hinchliff and Lewis Crutcher contributed to the Coliseum design as it continued to evolve through 1958. Louis Andre Lamoreux Jr. was the project manager, and W. Jack Gilstrap was the designer of the huge moveable curtain. Ned Kirschbaum also worked on the Coliseum's design from its beginnings in late 1957, when the SOM Portland office was awarded the commission for the building. Mr. Kirschbaum recalled working on a design featuring a wood delta-truss roof under another SOM architect, Chuck Wiley, who was on loan from the San Francisco office, but Mr. Kirschbaum did not have any knowledge of the domed wood structure alluded to by Bill Rouzie. Mr. Kirschbaum was primarily responsible for getting the sight lines and angles correct in the seating bowl.

By 1959 two similar designs were presented to the building's contractor, Hoffman Construction Company. One design would enable the Coliseum's roof construction to be entirely of steel, while the other scheme had the roof made of timber. Mr. Rouzie said that the wood design came out to be more expensive, since it had to be sprinklered using a totally separate water source from the rest of the building. ln the end, when it became evident that the steel structure was the more cost-effective choice, SOM tried to provide some additional involvement for the timber industry. "We gave them as much as we could," explained Bill Rouzie. The design included wood framing in the entry canopy, and also included large-scale laminated wood mullions in the curtainwall."

(for footnotes and quotation credits, please see the registration form by clicking here)