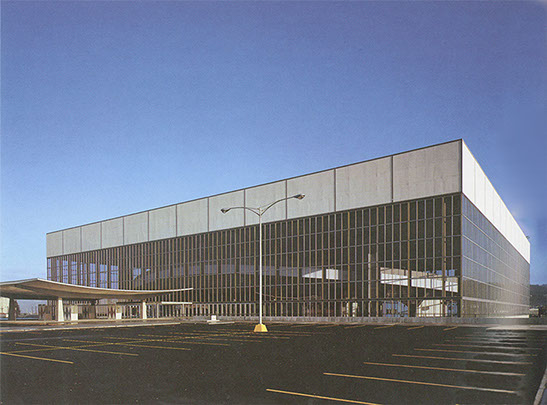 Memorial Coliseum is one of the most unique and architecturally significant arenas in the world. The building was designed by Skidmore, Owings & Merrill, the legendary firm behind landmarks such as the Lever House in New York City. Veterans Memorial Coliseum ranks with the greatest works of mid-20th Century modern architecture alongside the works of Ludwig Mies van der Rohe, Le Corbusier, Eero Saarinen, and Frank Lloyd Wright.

The genius of Memorial Coliseum’s design lies in its simplicity: a concrete bowl inside a glass box. Like a convertible in a world of hard tops, it is the only major arena in the world with a 360-degree view from the seating area through the façade to the view outside, giving visitors a panoramic view of the downtown Portland skyline and the Willamette River. Although the entire building is equivalent to nearly four city blocks in size  (360 feet square), it stands on just four columns. The concrete bowl also sits completely untouched by the surrounding glass curtain wall. This is an engineering marvel.

While the open-curtain configuration is part of the annual Rose Festival Grand Floral Parade, which travels through the building, few who have attended games and concerts have experienced the interior with the curtain open, resulting in a lessened appreciation of the building. Mature trees now surrounding a good part of the exterior further mask the best attributes of the Coliseum.

Portland has an architectural masterpiece of international stature. Please click on the icons below to learn more about why this building is so significant, beautiful and cool.