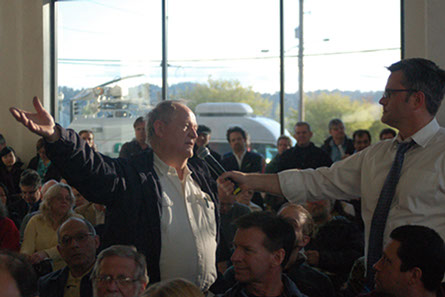 On an April 2009 evening at Leftbank, a historic former Northeast Broadway jazz club in the shadow of Memorial Coliseum, the successful community effort to save this one-of-a-kind building was born.

Portland Mayor Sam Adams and representatives of the planning bureau joined Merrit Paulson, owner of the minor league Portland Beavers franchise, to unveil a backroom partnership to tear down the city-owned Coliseum and build a baseball stadium for Paulson’s fledgling team. But instead of supporting the plan, a crowd of about 250 Coliseum supporters called for the building to be saved. “The mood was tense,” wrote Sarah Mirk in the Portland Mercury. “Some citizens did not parse their words.”

As planning staff unveiled renderings for two different ballpark configurations, Mayor Adams moved around the room with a microphone, talk show host-style, to allow public comment. “This is a total joke,” architecture critic Brian Libby told Adams. “It’s like taking a Mark Rothko painting and putting it in the dumpster,” architect Stuart Emmons said to the mayor. When a planning bureau representative explained that the Coliseum was to be razed but two above-ground parking garages would be saved, the crowd became openly hostile, leading to a chorus of boos. “I think he's trying to defuse public anger," observed Will Macht, a Portland State Univesity urban planning professor. "The plan is not deliberate, [and] it has not considered all the options in a professional way." As the meeting concluded, musician Thomas Lauderdale of Pink Martini, one of the mayor’s most vocal supporters during previous year’s election campaign, confronted Adams outside Leftbank. “How can you tear that beautiful building down?” Lauderdale asked.

But the crowded chaos of the Leftbank meeting gave birth to a true David and Goliath story, one of community activisim overcoming the interests of city leadership and (in Paulson and Blazers owner Paul Allen) its moneyed power brokers. A few weeks later, as some of the most vocal defenders of the Coliseum at Leftbank came together to found the Friends of Memorial Coliseum, gathering support from a host of national historic preservation and sustainable organizations as well as a cross-section of Portlanders, Adams announced he was reversing course, and that the city would abandon efforts to raze the building. Within months, the Friends of Memorial Coliseum saw the building added to the National Register of Historic Places.

Dangers to the building would remain, including a city-led Stakeholder Advisory Committee that fruitlessly searched for new uses for this busy multi-purpose arena: from a water park to a peace garden to a fitness center. Today the struggle remains to follow through with not just saving but restoring the Portland's 'Glass Palace'. But there’s no doubt that saving Memorial Coliseum started that night at Leftbank.